Dr Sarah Doherty
The Adoption
& Adaptation of the Potter’s Wheel

Dr Sarah Doherty delivered a lecture to the Society looking at manufacturing techniques in pottery production in Ancient Egypt and the impact of the introduction of the potter’s wheel.
The first attested use of the potter’s wheel is in about 3000BC in the Near East; the area of Iran, Iraq and the Levant. At this time in Egypt vast quantities of pottery were already being created, by hand, with considerable variety in shape, form, use, quality and decoration.
It would appear that the wheel was introduced to Egypt around 2600BC in the reign of Sneferu. It is clear that this new technology was introduced, rather than invented in Egypt. There are a number of prerequisites for successful use of a wheel to be viable, principally the skill to quarry and shape hard stone and the ability to smelt metal to make copper chisels and there is an abundance of archaeological evidence demonstrating that the Egyptians were capable of this long before 2600BC.
The introduction of new technology would normally be expected to bring a range of benefits and with the potter’s wheel we might assume that it would allow mass production, standardisation, a speeding up of the process and greater variety, but in fact this was not the case at all. After the introduction of the wheel there was a noticeable reduction in the decoration and the different techniques; a trait that was also found in the Near East. Mass production of objects such as bread moulds and beer jars continued as before by hand and the wheel only appears to have been used for elite purposes. Examples found are made of basalt, a highly prized stone, which is extremely hard and difficult to work, even though less hard and more common stone would have been equally effective for this purpose. The find spots are also telling, being near temples and cult sites.
It is also evident that, although the pottery was finished on the wheel, it was still started by hand using the commonly used coil method. From 2600Bc onwards many miniature wheel-made pots were placed around pyramid fields and these are the principle finds for wheel created pottery. They were generally about 10cm tall, without decoration, and are presumed to be part of the daily cult offerings. It would seem that, although the potter’s wheel was now available in Egypt, it was reserved for elite use only and the prestige of the vessels being made by means of the new technology was more significant than any aesthetic qualities. Larger vessels were later made using the wheel and at Amarna there are examples of this, but again they were not thrown entirely using the wheel but rather made in stages with the first part by hand, then refinement on the wheel before the next stage was started – again by hand.
Few actual wheels have been found but there are numerous examples in tomb scenes and tomb models and at Beni Hassan there is a particularly fine scene showing the process from start to finish in clear detail. In all instances we see that the wheel was propelled by one hand whilst the shaping was completed by the other, or by both hands when the wheel was still spinning. Sarah constructed a wheel of her own based on this design to see how closely she could replicate the pottery of the Ancient Egyptians, with a good measure of success. It seems, however, that the life of a potter was not one to be envied and the famous satire of the trades describes potters as, amongst other things, muddier than swine and with clothes that are solid!
Sarah’s book based on her PhD research is available from Archaeopress : The Origins and Use of the Potter’s Wheel in Ancient Egypt – Sarah Doherty.

Picture : First known depiction of a potters wheel in Egypt

Archeopress : The Origins and Use of the Potter’s Wheel in Ancient Egypt 20% discount order form Amarna Project Pottery Store Fund 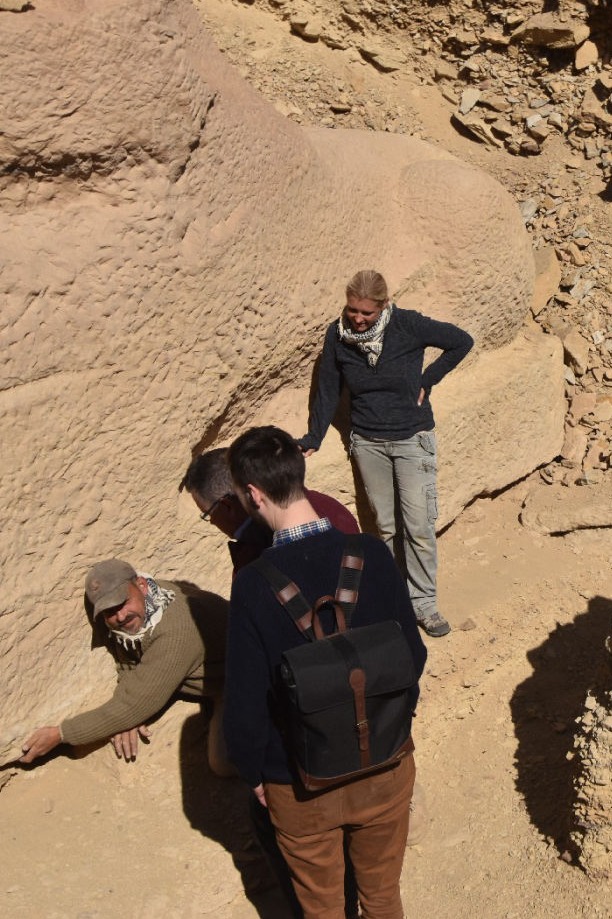 John and Maria joined us via Zoom. Maria was quite familiar with this , but it was John’s first experience. They have been excavating at Gebel el-Silsila since 2012 and introduced us firstly to their hard-working team, with whom they have made a number of remarkable discoveries over the last eight years. Due to Covid-19 restrictions physical presence at the site for the 2020 season was not possible, but instead they took the opportunity to undertake a thorough review of material from earlier years and have published a number of papers.
The site covers an area, on both the West and East banks of the Nile, of 30 square kilometres and, although the majority of their work has concentrated on the New Kingdom, it is clear that, from an Ancient Egyptian perspective, the area was occupied from about 8500 years ago right through to Roman times. Previous scholars have focussed primarily on the quarrying aspect, this being the primary source of Nubian Sandstone used in monumental building projects throughout Ancient Egypt. Maria and John, however, have taken a much broader approach taking into consideration ancient rock art, inscriptions form all periods, settlement activity and infrastructure as well as the 104 quarry sites.
Some of the main areas they have worked on include a worker’s village on the West bank situated on the plateau above the quarry of Tutankhamun. 41 structures have been uncovered in a small town, together with roads, quays and other infrastructure. It seems likely that this was a re-use of an earlier site and, later, the archaeology shows that the area was again used in Roman times.
Moving to the East bank, excavations started in 2015 at the Temple of Sobek. This site was very poorly preserved and had been dismantled in antiquity. Evidence was found from the time of Rameses II and there were also earlier finds from the 18th Dynasty. Interestingly some remains of limestone were found there. It was during the reign of Hatshepsut that the significant shift from building with limestone to sandstone took place. Very close to the Temple another structure was uncovered, which has been called Sobek’s Den. Excavation through many layers has brought to light crocodile remains and further clearance is planned when the team can restart work there.
A little south of the Temple and still on the East bank, a necropolis was discovered but it is in a poor state, due to corrosion by Nile silt from countless inundations reaching the area over the years and current water table issues. So far 73 tombs have been documented; 33 rock cut chambers and 40 crypt burials, including 2 shaft tombs. There are no inscriptions inside any of the tombs, but there are an intriguing number of images of feet. It would appear that the necropolis was used for around 200 years. The primary use seems to have been in the Thutmosid period, though activity ceased before the reigns of Amenhotep III and Amenhotep IV, and there appears to have been some further use in the 19th and finally the 20th Dynasties. From the style of the burials and the funerary objects recovered, it is apparent that this necropolis was not used for the poorest people in the community.
Exciting work has also taken place in an area relating to the time of Amenhotep III and Amenhotep IV and John and Maria will shortly be publishing a paper on this. They very much hope to return to Gebel el-Silsila in 2021 to renew excavations on this area in particular and other parts of the site.

Dr Cooke gave the Society a highly detailed description of one of the prize exhibits in the Ancient Egypt Gallery at the World Museum in Liverpool, where he is the Curator.
This incredible object was bought and brought to the UK by Reverend Henry Stobart, who then sold it to Joseph Meyer and it was donated to the museum in 1867.
It has variously been described as mummy wrappings, a scarf, a belt and a girdle, but agreement is unanimous in that it is an internationally important work of art and an archaeological masterpiece.
The girdle is a woven strip of fabric 17 feet long and tapering from a width of five inches to just two inches at its narrow end. Despite being 3000 years old the colours on this textile, made of flax, are still vibrant due to the use of natural dyes, and the exquisite design is woven into both sides. It is thought that it was the work of foreign weavers, descended from those brought to Egypt from campaigns during the 18th Dynasty.
The cartouche of Ramses III is inscribed along the central portion of the fabric and images, which still exist today, indicate how the girdle was worn wrapped around the chest.
Since the girdle was put on display at the museum many modern weavers have tried, but failed, to reproduce the exceptionally fine quality of the weaving using looms similar to those available at the time when it was created. The object was exhibited in Leiden whilst the Gallery was being refurbished and since the reopening in 2008 it has been placed in a darkened display case lit by an internal visitor-operated light, to prevent light damage.
Many textile and weaving enthusiasts visit the exhibition each year to marvel at the complexity of the structure and design of this extraordinary and beautiful artefact